Another news tidbit on Kardashian…

Abraham scolds Kardashian for getting pregnant a second time for a reason we’re still unclear on.

Does that surprise you? 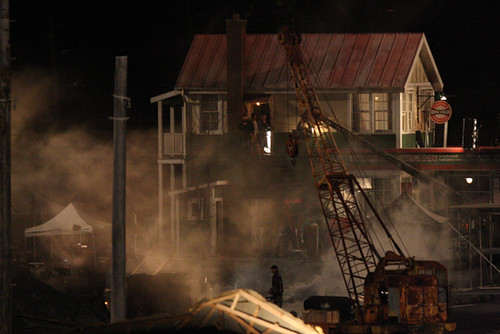 November 2011What fun and excitement us locals have been having on our modest sightseeing tours of Baz Lurmann’s set of ‘The Great Gatsby’.

We’ve been playing our own little game of ‘Catch Me If You Can’, and if your a Leo Dicaprio fan, you will have a bit of an idea of what we’ve been talking about. There was no escaping our camera lens and local information network.

Even Leo has been putting his hand over his mouth and chin from time to time, in order to try to protect his identity and keep the mystique.

The local film site was the former abandoned White Bay Power Station at Rozelle. Main attractions are Leonardo DiCaprio and Tobey Maguire, but we’re also been happy to spy on Joel and director, Baz Luhrmann too.

‘Spot the celeb’ is our little game we play, and the other, ‘snap the celeb’, while the others we can’t get into detail on, but it’s a bit of ‘Catch Me If You Can’.

It’s all set in the 1920s, and the costumes and cars are magnificent.

We call it ‘AussieWood’, rather than Hollywood, and we’re hoping Leo and friends spend a bit more time down under before they head back to the U.S. A little birdie told us something about ‘Blue Mountains’, but that’s just a rumour ok.

It’s been a big week in Australia for celeb hunters with Gatsby in Sydney, Kim Kardashian doing a quickly in Australia, Val Kilmer doing Brisbane and Melbourne for a comic fest, Warnie and Liz doing the Cup in Melbourne, and Tiger Woods doing Perth.

Gatsby director Luhrmann has been doing lots of evening film scenes at the freaky place known as the Valley of the Ashes.

Wilson’s garage is a hive of activity, where Tom Buchanan (Joel Edgerton) frequents his mistress, Myrtle Wilson (Isla Fisher). Jay Gatsby (DiCaprio) is up for Daisy Buchanan (Carey Mulligan), and we think a few of the extras might be going at it also.

Be looking out of swags of classics cars, at least one of which is understood to get involved in massive accident towards the end of the movie.

Some other film scenes have been shot at Fox Studios, Moore Park, where buildings from 1920s New York have been recreated.

Budget is in the region of 0 million, but we heard its almost certain to go over budget.

F. Scott Fitzgerald’s, writer of the famous novel would be proud.

We hear Luhrmann will return to Fox Studios, Moore Park. There’s also a rumour of a Gatsby’s Castle scene to be shot at St Patrick’s College in Manly, and then there’s the Blue Mountains shooting tip off.

Gatsby is expected to open by Christmas next year, but in the meantime we’re enjoying seeing Leo and friends do their thing close up, likely closer than Baz would have preferred, but that’s show business.

Disclaimer: The Flickr image and YouTube video were automatically picked up by the publishing system from the sources based on this post’s keyword: Kardashian